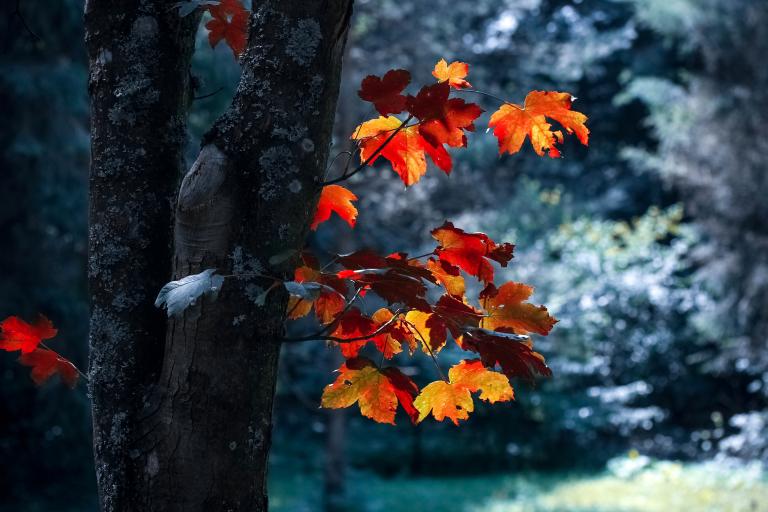 I’ve learned that, like the Wheel of the Year itself, my life moves in cycles. I can remember being a Blue Star Dedicant years and years ago and realizing—courtesy of my very astute teacher who told me I needed to keep track of these things, which sounds obvious now but totally was not at the time—that my interests, moods, relationship with my body, and connection to the gods all ebbed and flowed according to the seasons. I am the happiest and most ambitious over the summer. In August, I have to be mindful of depression, which will set in as school starts. Halloween is fun, but I tend to be sick or injured this time of year. December is a good time to talk to the gods and feel them most strongly in my life. Imbolc always has be gunning to start some new spiritual project that’s usually a little beyond my scope at the time. I spend too much money in May, because all of my Taurus is hanging out and I feel good about the coming time off. And so on.

Years of doing this, and I finally have a reasonably good sense of myself. I used to try to fight it, but I find that it’s easier to just flow and be patient with myself. Work isn’t going away, and neither is depression, tax season, or final exam schedules, so better to just do what I can to prepare and move through these things as gracefully as possible.

My coven has a cycle to it to: times when it’s easier to meet often, times when people need extra support, and times when I feel like the worst high priestess in the world because I have to relinquish much of the coven’s functional work to others for the sake of my mental health. It’s not a problem, but in the past it’s been very frustrating. When you don’t recognize patterns and respond accordingly, it can feel like everything is just happening to you beyond control.

Over the summer, some close friends and I attended Free Spirit Gathering in Darlington, MD, and sat through a workshop entitled (if memory serves me) “Your Personal Wheel of the Year.”  The premise was simple enough, and it sounded interesting.  I think a lot of people experience difficulty incorporating seasonal festivities and ritual into their already packed schedules, and on top of that I’m constantly listening to Pagans of various stripes bemoan their lack of a connection to nature.  My guess was that this workshop would allow us to discuss and tackle some of those hurdles, especially given that most of the Pagans I know are city dwellers or suburbanites who spend more time negotiating pavement and parking meters rather than forests and fields.  Available books on sabbats often say more about harvesting corn and baking bread than is necessarily very realistic for most of us.  God knows I’m not harvesting grain or milking cows (etcetera), like, probably ever.

Anyway, I found myself somewhat disappointed.  The workshop was fine, it just wasn’t what I’d hoped.  The folks running it were farm dwellers, and while their stories were interesting, they weren’t particularly useful or inspiring for a city witch.  See my not having chickens or grain silos.

This got me thinking about the dichotomy that we’ve created between this thing we call “nature” and the sorts of environments inhabited by people (which are “unnatural” or otherwise separate and inherently less than “nature”).  Nature is a thing that we must “get back to,” or “connect with.”  Nature is something we drive to on weekends and vacations.  Nature is something that Pagans revere on some level, while simultaneously being somehow apart from it on some basic level (we have to “reconnect” or “get back to” it, after all).

I’ve been thinking about all of those times I’ve gone hiking in Virginia and North Carolina, all of those visits to my mountain dwelling friend Morgan, and all of those moments when I’ve fantasized about just running away and living in the woods.  “Nature” certainly has that sort of appeal to me, as I think it does for a lot of Pagans and witches.

But I don’t buy into this kind of dichotomy, and I don’t think it’s particularly useful for most of us anyway.  Running away into the woods is an impossibility for almost all of us, and I would venture to guess that many of those who could would be largely unequipped.  I don’t buy into the idea that cities and townhouses and strip malls and paved streets are something separate from nature.  As human beings, we are as much an embodiment of the natural world (whatever that is) as any other creature.  How can we possibly presume that we operate outside of it?  Especially as Pagans?  Sometimes I find myself even resenting the underlying implication behind statements like, “Pagans need to reconnect to nature,” that those of us who are happy city dwellers (with no real desire to leave our cities) are somehow less effective in either our spiritual practices or our magic.  I think this desire to reconnect has less to do with this artificial, human constructed thing called “nature” and more to do with cultivating a relationship with whatever land on which we happen to dwell.

I’m not from Charlotte, and it’s not a town I would ever have chosen voluntarily.  I’ve spent a lot of time not liking Charlotte.  Moving here was a serious culture shock for me (and often still is), and it’s been a real struggle finding and then working to build a wider Pagan community here.  There’s still a long way to go.  But despite all that, she’s grown on me.  My experience has been that cities have definitive personalities (D.C. sure as hell does), and I’ve had a hard time sussing out Charlotte’s, I think largely because shes growing so fast and is such a weird amalgamation of class and racial tensions.  I think I’m starting to get a better sense of her, though.  As much as I’ve railed against Charlotte this past year, I can finally see the potential.

I know a number of witches who see themselves as stewards of forests, fields, and streams.  I haven’t met many who  have adopted cities in the same way.  I’m increasingly starting to see Charlotte as my city, and this is the sort of “getting back to nature” that I want to cultivate.