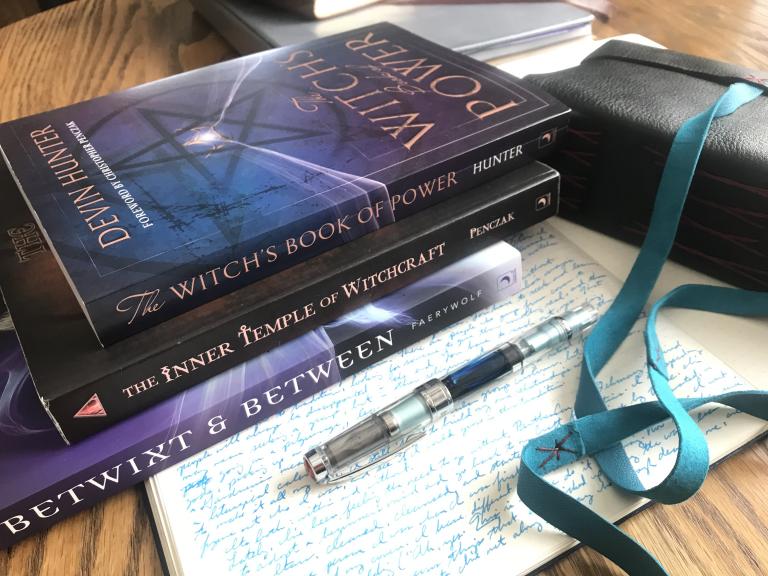 I confess to being one of those people who gets a little suspicious when interacting with people who claim to be initiates in multiples traditions. In traditional Wiccan spaces, it’s common to hear tales of wayfaring strangers out to collect initiations and titles for the sake of being able to assert more authority in their community. These sorts of people are supposed to blow through, get their stamp on the forehead, and then move on to the next group. Their website biographies are usually some variant on “Lord High Priest Magnum Ravenface is a third degree high priest and magus in the ancient tradition of überwicca, as well as Tumbleweed Wicca, the Moon Raven tradition of High Witchcraft, and an adept in the Ordo Templi Golden Dawn. He’s also a Reiki master, a fourth degree black belt, and an ordained doula.”

It’s hard to take people like this seriously. The reaction they’re going for is, “Wow, that guy sure does know a lot. I should totally give him my money.” But in my case it’s usually more like, “Damn, this dude can’t commit to anything,” or “I wonder why he keeps getting kicked out of all these trads.” Rather than being impressed, I’m wary.

Those people are out there, sure, but increasingly I’m meeting more and more practitioners who are perfectly reasonable and secure in themselves who, nonetheless, belong to multiple traditions. Despite the jokes and worry, it actually makes good sense to explore multiple traditions, and a lot of people do over the course of their lives. I think if we’re practicing the Craft effectively, we grow and change and our magical practices evolve with us. If your tradition is worth its salt, that movement—that evolution—is deeper, not just broader. There’s a big difference between collecting initiations for the sake of it and genuinely seeking out truth in other forms, from different resources. Sometimes I think we don’t give human beings enough credit for how complex we are. It’s one of the reasons why there’s so much religious variety to begin with. We need different things at different times in our lives. Across time people from any tradition you can name have been (knowingly or, more often, not) combining and recombining pieces and strands from myriad sources. There’s no such thing as a “pure” tradition. We may hold onto fundamental tenets, particular liturgies, and established paradigms, but sometimes going deeper or going broader means looking beyond those.

When I hit a plateau in my tarot practice a few years ago, I began studying Hermetic Qabalah, which provided whole new wells from which to draw. When I was working to strengthen my connection to the gods of my tradition, I turned to the folklore of the British Isles, as well as to the personal histories and accounts of the witches who were their early mouthpieces (or claimed to be, in any case).

There’s a balance to be struck between seeking within and seeking without. There’s no Wiccan tradition, for example, that can hand you Dumbo’s magic feather and instantly give you access to the Mysteries. You have to seek and learn, yes, but then you have to go within. There are people who jump from coven to coven, tradition to tradition, looking for someone to give them something real, some secret that will change everything, and those people will always be disappointed in the end. You have to reach out, yes. That may mean seeking a group, but in other groups it may also mean reading, going on some sort of pilgrimage, learning a new language to communicate with the old gods or native spirits, picking up an ancient art form or martial discipline, or countless other things. Becoming a Gardnerian meant finding people to train me, memorizing a ritual form, learning a liturgical calendar, and adopting particular group customs, but I still had to make it all my own. I still had to build my own relationships with the gods, figure out who I was, and see if I could grow in this tradition.

It’s both: within and without

Lately, I’ve been feeling the need to go without. PantheaCon last February inspired me to adopt a beginner’s mind and go back to my Craft foundations. I stripped my home altars, cleaned, cleansed, and started to rebuild, piece by piece. I’m not the same person I was when I was first initiated. or when I was elevated, or when I started my coven. I have different questions, different perspectives. I went deeper in my rebuilding (“Ah, yes. Thisis why we do it this way. Now it makes sense.”). I let go of the extraneous things I’d picked up along the way, even saying farewell (at least for now) to gods and spirits I met who, though dear to me, are not the gods I am pledged to serve. It was clear that if I wanted to go deeper I needed to be monogamous at this time.

But magically, the world has opened up. There I’ve cast a wide net. I’m no stranger to other types of witchcraft, but I haven’t been a seeker in a long time. I haven’t gone in with the very clear attitude of, “Teach me. I want to know more and be able to do more.” That’s a hard thing for folks like myself who may have been around for a while. Being at the top of whatever your coven hierarchy is, or being a teacher or groupleader of any kind, it can be challenging to remember that we’re still responsible for our own growth. The top is an illusion. There’s always more to learn. Mastery is an illusion.

I’ve started learning about the magical practices and techniques of other traditions (or from those outside of the boundaries of any one tradition), and what I’m finding is that in Craft, regardless of our religious persuasions or dealings in the spirit realm or our social differences, the fundamental skills are the same: altering consciousness, meditation, raising power, directing and shaping it, and perceiving the Other. In studying and experimenting with others, my intention is to go deeper into my own tradition. To acquire more tools that may be useful, not to replace the ones I already have.

So I get it now. I’m becoming less suspicious. Sometimes, pursuing avenues in witchcraft isn’t about ego. In fact, it may be quite the opposite, an acknowledgment that we don’t have all the answers. That we’re still students, and there’s so much left to learn.